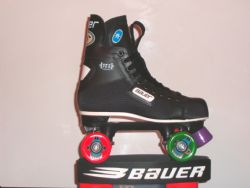 More years ago than I care to remember I was seized by the impulse to buy a pair of roller boots.  Inline skates were just emerging as the new big thing, but I wasn’t impressed – I wanted something more retro, a bit more rock and roll. I took a friend who knew about these things and headed to a skate shop in Camden.  I came out clutching a huge box housing a pair of Bauer quads – not unlike those in the pic, except mine were completely black with purple wheels.

They were bloody expensive.

I have no idea what I was thinking.

Not long after that I had reason to make a speedy exit from my little bedsit in Wood Green. Not content with making me live in some sort of menagerie, the owners had obviously taken exception to me setting fire to my kitchen(ette) and tried to demand rent that I didn’t owe.  They even threatened to phone my mother, prompting me to use the kind of language that they had been hitherto unaware I was capable of emitting – fires aside, I had been a model tenant.

My sudden evacuation turned out to be a good thing.  For one thing it precipitated a move to the other side of the North Circular to the almost leafy area of Palmers Green. House sharing with my social animal of a friend meant that I basically lived alone throughout the week, meeting him at the weekends and tagging along to whatever activities he had planned – life was easy.  Then he went travelling, and I didn’t.  I really should have gone with him, although he’d have spent the whole time persuading me to stand up and move, rather than sit down and do nothing.  Instead I spent a brief sojourn living 180 degrees around the capital.  Just off the south circ, in what is generously called Clapham South, but is more honestly Balham North, I decided to get my (practically untouched) skates out.

Did I mention that I was living off the South Circular?

As I rocketed down the path, I noted that a) the bearing on my skates were fabulous – the wheels spinned faster than I remembered my childhood roller skates moving and b) I had no idea how to stop…..

My dreams of skating carelessly around the common stopped abruptly at the point that I made a grab for the lamppost.

Not long after that, I exited Balham and followed my much more adventurous friend on his travels.  As predicted, my tendency to sit still for long periods of time meant that we crossed over rather than tandemed, which worked pretty well – apart from the time that he tried to call international rescue after I didn’t turn up in Lake Toba.  In my defence I was loving the Perhentian Islands, and suffering from Giardia – long journeys were not to be attempted.

I never did learn to skate, not in those skates anyway.  I in-lined around Centennial Park, Sydney many times and quite took to the whole in-line thing, but my poor old Bauers remained untouched.

I still have them, and whenever they get unearthed I refuse to throw them away.  There must be some deep seated reason there somewhere…..I’m obviously still hankering after those elongated thigh muscles.