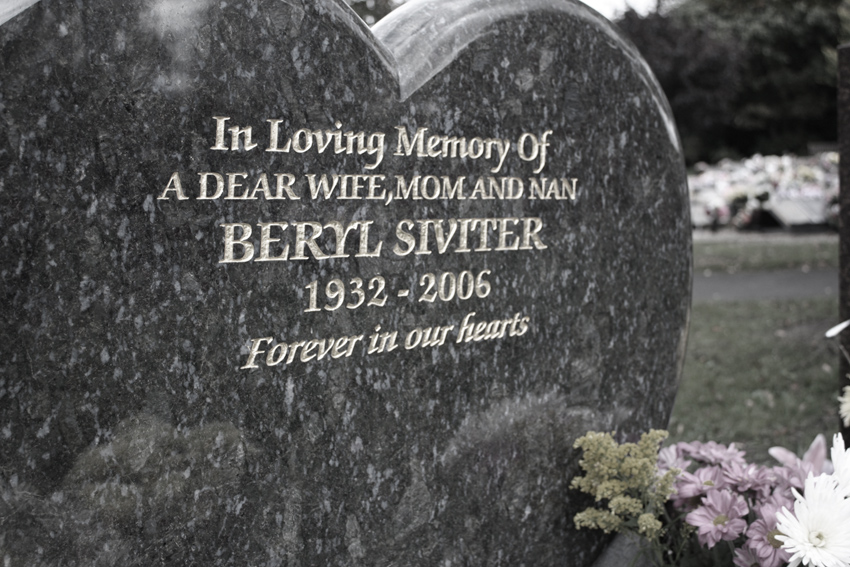 I don’t normally like to admit that I’m particularly lacking in an area, but in the case of my sense of direction it’s so blatantly obvious that I’m probably better off being up front about it.

Yesterday I had planned to visit Beryl to lay flowers at her grave. I’d been getting around to it for far too long, and after a rancid August and early September this felt like the right time to go.

Well aware of my predisposition to getting lost, I prepared the night before.  I had maps and directions aplenty, I’d read through them all.  I knew I was heading to Brierley Hill Cemetery first, then onto Bromsgrove to meet with friends for a rejuvenating cuppa.  Sorted.

The early stages were heartening. Radio 2 chimed in the background, Neil Diamond singing September Morn lifted me, another appalling result on Popmaster felled me, and then the M42….

Whose idea was it to split a motorway in two different directions?  I was flummoxed, I chose West and drove on, then wavered, chose North, turned around and very nearly hit Coventry before I realised that I’d been right in the first place.  Eventually I made it through to Stourbridge, congratulating myself on a relatively easy trip.  Things got a little bit hairy when I took a left turn too early and nearly ended up in the canal, but minutes later I was outside the cemetery, stomach churning as I realised that this was a new experience for me.

The last time I’d been there was at Beryl’s funeral.  I’d taken the children, including a new born Immy, but I was pretty sure I could remember where her grave was.  As I drove through the gates something didn’t feel quite right. I wondered if I’d come in the back way, or missed a turn.  Slowly the shameful truth hit and I realised that I’d come to the wrong cemetery, and more to the point I had no idea where the right one was.

Emergency calls to my parents managed to track down the right place and I set back off, tracking my progress on iPhone maps, with two eyes mostly on the road. Suffice to say I made it, and I had a little chat, and it was just what I needed.

All I needed to do now was make it to Bromsgrove in one piece.  Amazingly I did this, with a very minor detour, and was only slightly crazed as I fell over the threshold of the very lovely Tara Cain‘s house and enjoyed an afternoon cackling, along with Jay and Moo’s mum, who I will not name whilst she still holds on to some small shred of anonymity 😉

All in all – a perfect day.

11 thoughts on “The Wrong Cemetery….”