It’s more surprising to me than it will be to you that I’m blogging, more so that I’m responding to a meme.  But when one of your oldest blogging friends asks it of you there’s not really anything you can do other than oblige. So, this one’s for you Him Up North….

I’ve been tagged in a tandem meme, two for the price of one so to speak.  The first aspect is to reveal where I write, and the truth is that since the purchase of the electric blanket it’s mainly in bed.  But a girl has to keep some things to herself, so this is the alternative place: 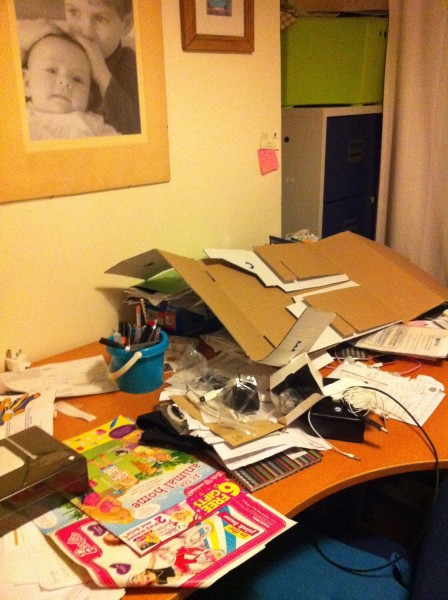 That picture came in very handy in a client meeting today when I was accused of being organised and meticulous. I think they now have a clearer picture of how I work (amazingly, I’m still employed).

And now moving onto the ‘Versatile Blogger’ bit which seemingly means I have to divulge seven facts about me.

Like there’s anything vaguely interesting that you don’t already already know.

1/ I’m neither organised, nor meticulous

4/ I am not a regular Songs of Praise viewer

5/ I wrote a sex survey this week

7/ I quite enjoyed the new Ricky Gervais comedy – what?!….

Karen @ If I could Escape

Caroline @ Letters from your mum

Henrietta @ Marketing to Milk
because I know that none of them will feel obliged, *stares menacingly at HUN*…

This one’s for you Him Up North
Tagged on: blogging    him up north    meme

3 thoughts on “This one’s for you Him Up North”